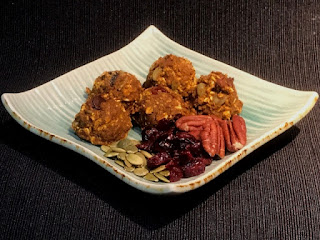 I have this friend. Well, okay, he was Mr. Wright's friend, first, since they went to school together, but I'm claiming him as my veryownpersonal friend, because we share something Mr. Wright does not:

Craig and I both eat an entirely plant-based diet.

So, who is this guy, anyway? Well, for starters, he's the creative brain behind Craig Olsen Interior Design, but he's also a fantastic actor, and he's working on an explosive documentary about one of Hollywood's best-kept secrets.

Beyond that, he's a fabulous human being, and a joy to know and be around. And he loves friends! You can connect with him on his Instagram page.

Anyway, so Craig posted photos of these really yummy-looking pumpkin energy bites on his Facebook page, and I just had to have the recipe. I offered to barter my Pumpkin Spice Mini Cupcakes with Maple Cinnamon Cream Cheese Frosting recipe, and my Pumpkin Pecan Pie recipe in exchange.

He sent the recipe, and it wasn't long before I was in the grocery store, messaging him, Is it weird if I want to put dried cranberries in it?

No, he said. He'd thought about adding cranberries, too. 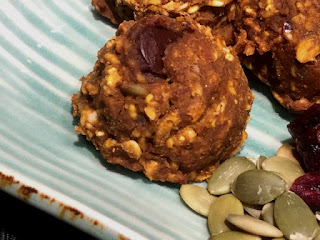 I made a first batch, and found it was too "spiced" for my kiddos, so I cut the amount of spice. (Craig's original recipe called for pumpkin pie spice, but I make my own blend, and adjusted accordingly.)

Then, I reflected on that Pumpkin Pecan Pie recipe, and thought... These would be fantastic with pecans! So, pecans got added to the mix.

The end result is fantastic, and it's yet another lesson in how we can use recipes as a jumping-off point for our own creativity.

These energy bites boast not only 2 grams of protein each, but are also high in vitamin A!

Here's my final version of the recipe, inspired by the inimitable Craig Olsen: 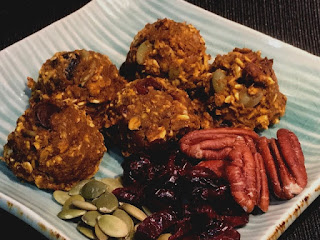 In a large mixing bowl, combine ingredients and mix thoroughly.

(These bites won't bake "out," so you don't need to leave much space between them.)

Posted by Christina-Marie Wright at 10:09 AM