Vegan Pecan Pie and Crimes of the Heart 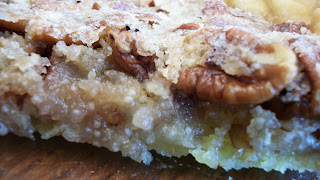 File this one under "recipes developed under the influence of a very strong non-vegan craving."

It's literally been decades since I've had pecan pie. Believe me, I was due.

A southern favorite, pecan pie is usually made with corn syrup, butter and eggs and is rumored to have been developed by the French after settling in New Orleans - though attempts to trace the exact origins have proven inconclusive.

A couple years ago, I played one of the leads in Crimes of the Heart, a play written by Beth Henley and set in Hazelhurst, Mississippi. Strangely, your sexy vegan mama was cast as the dowdy Lenny, a 30-year-old woman on the verge of spinsterhood. Seriously. Anyway, at one point in the play, another character, Doc, gave me a bag of pecans. Delighted, I (Lenny) thanked him for the sack, declaring I'd make a pecan pie.

Yeah, right, said my vegan brain every time I repeated the line.

But now, it's a reality. I have a delicious, gooey, sweet, crunchy pecan pie cooling in my kitchen right this very minute. I'm sure Beth Henley - and my director - would be proud at how far I've taken the role.

Funny side note: At the end of the play, the three leads - sisters - were required to bite into a piece of birthday cake. As if having a vegan "sister" wasn't enough, the girl cast as Babe was allergic to corn, wheat, and dairy. My mother crafted a completely edible and delicious cake using rice flour and frosted it with icing made from powdered sugar that was cornstarch-free.

My mom is awesome.

1 c. cane juice crystals or raw sugar (I use Zulka

In a coffee grinder or blender, whiz the tapioca until it's a fine powder.

In a medium or large bowl, combine all ingredients, including the powdered tapioca. Stir until well-mixed and pour into prepared pie crust.

Bake for 20 minutes, then reduce oven temperature to 300 degrees and bake for 30 minutes longer.

Remove from oven and allow to cool before serving. 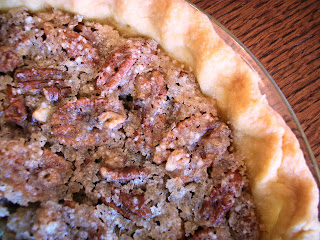 "Like" Sexy Vegan Mama on Facebook! Don't forget to swing by The Gonzo Mama's place to see what she's up to.
Posted by Christina-Marie Wright at 5:14 PM