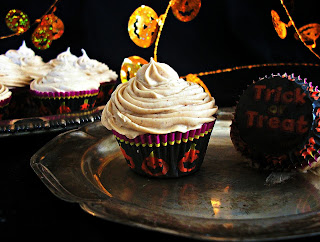 In a panic, I threw open the cupboards and pantry, scrambling to assemble the ingredients for my almost-famous Derby Gurlz Double Mocha Mini-Cupcakes with Coconut Almond Cream Cheese Frosting.

Now, the Sexy Vegan Mama family has two cars, and three drivers currently arm wrestling over who gets to drive them. Y'all might find it hard to believe, but arm wrestling is not my gift. That's how, when I realized I was out of both almond extract and cocoa powder, I was forced to improvise due to a lack of transportation to the grocery store.

The result - through a tremendous stroke of luck and a prayer - was fabulously Fall-ish, and completely scrumptious. 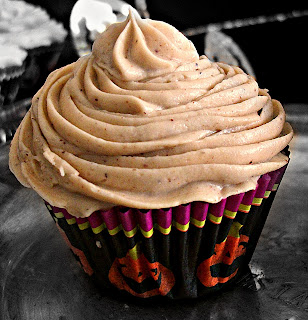 Add water, oil and apple cider vinegar, mixing well by hand or with a stand mixer.

Beat in pumpkin pie filling and continue beating for two minutes or so; until batter is light and creamy.

Line mini cupcake tins with paper liners. Tip: Spray inside of papers with a small blast of non-stick spray before filling for easy cupcake removal after baking!

Fill cups about 2/3 full with batter.

Bake for 10 to 12 minutes, or until a toothpick inserted into middle comes out clean.

In a large bowl, cream together margarine and cream cheese with a handheld electric mixer or stand mixer.

Add powdered sugar, one cup at a time, until desired consistency is achieved.

I used a Wilton #21 star tip to pipe icing onto my Pumpkin Spice Mini Cupcakes.

Hope you find these as frightfully fun as my family did (I had to make another batch for the carnival after most of the originals mysteriously disappeared. I suspect GHOSTS... EEEEEEK!)! 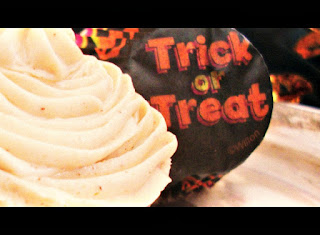 "Like" Sexy Vegan Mama on Facebook! Don't forget to swing by The Gonzo Mama's place to see what she's up to.
Posted by Christina-Marie Wright at 10:37 PM