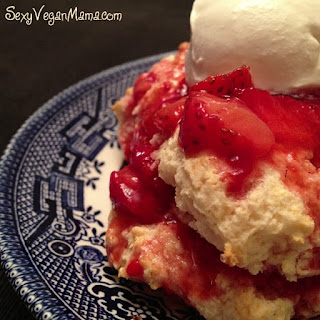 With most of a hectic, emotionally draining week behind me, I settled down last night for a moment of peace and a jolt of java.

Naturally, the moment didn't last. It never does when you have seven kids, you know.

"Mooooooommmm! We need dessert," Snugglebug demanded. Have I mentioned she's six years old, and actively seeking a small country to dictate? Nothing too extravagant, you understand... Just a nice, little "starter" nation.

I was exhausted, and experienced enough to know negotiating with a future dictator was futile, and a bit of an accountability issue -- I'd promised dessert if she met her behavior goal this week, and she did.

When it comes to desserts, I've set the bar fairly high. After all, my and William Maltese's collaborative love of sweets resulted in Get-Real Vegan Desserts: Vegan Recipes for the Rest of Us. Now that my name is on a dessert cookbook, I'm expected to bring it when it comes to the final course... No more popping open a bag of Oreos and arranging them on a plate as if they're actually homemade.

However, that doesn't mean I have to spend hours in the kitchen to whip up something sweet. (Though, to be honest, I sometimes enjoy doing just that -- especially if I can find an afternoon to myself. Ah, sweet sanctuary!) Nope... I totally cheated, and used a baking mix to rock out a tasty, impressive dessert in less than 20 minutes. The recipe, adapted from one found on the back of a Bisquick Heart Smart (did ya know it's VEGAN?!) box, goes like this: 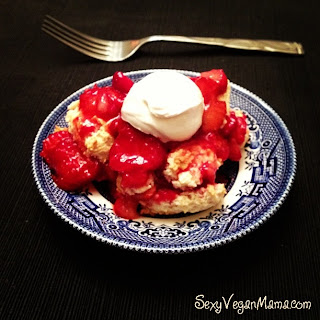 Slice strawberries into a medium bowl. Sprinkle with three tablespoons cane juice crystals or natural sugar. Stir together, and set aside.

For smaller shortcakes, use a generously rounded tablespoon to drop dough onto an ungreased baking sheet.

For larger shortcakes, divide dough into four sections, then drop onto baking sheet.

Bake for 9 to 12 minutes. The tops should just begin to turn golden.

Remove from oven and allow to cool for two minutes, then slice the shortcakes horizontally into a "top" and "bottom" while still warm.

Garnish with a dollop of vegan sour cream, and enjoy!

"Like" Sexy Vegan Mama on Facebook, and order your copy of Get-Real Vegan Desserts: Vegan Recipes for the Rest of Us, today! Don't forget to swing by The Gonzo Mama's place to see what she's up to. 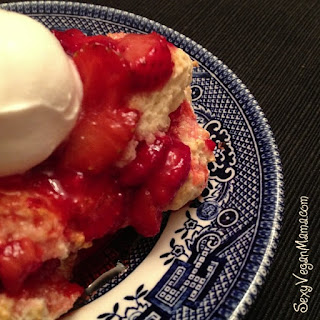 Posted by Christina-Marie Wright at 10:36 PM