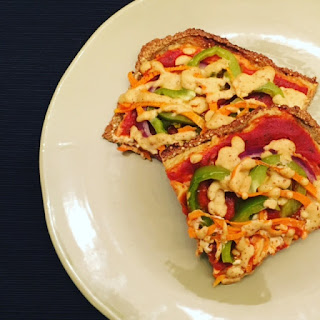 Pizza... pizza... it's like its own food group, right? And when your house is home to a bundle of kids, there's no escaping it. However, I'm always on a quest to make it healthier, more nutritious, and less processed.

Until recently, we've used Daiya Deliciously Dairy-Free "cheese" shreds for our pizzas, and I stand by them. They're awesome!

However, I've been trying to create more from-scratch ingredients, and cut down on processed foods for the kids. Daiya shreds are great time-savers, but this cashew "cheese" sauce recipe contains more protein, more iron, more fiber, and far less sodium.

And... let's talk about gluten. For those of us who aren't diagnosed with celiac disease, gluten intolerance, or another gluten allergy or sensitivity... we may not see a need to eliminate or reduce our gluten intake, but for some of us with autoimmune disorders, it may be worth taking a look at.

In our house, we have family members with Rheumatoid Arthritis and Alopecia Areata -- both autoimmune disorders.

Several prominent doctors have written about the relationships between gluten and inflammation, and between inflammation and autoimmune disorders. Could it be possible that eliminating gluten could give relief to those of us suffering from autoimmune disorders? Maybe. There's still a lot of research to be done, but anecdotal evidence certainly seems to point to relief coming from a gluten-free diet.

While the doctors and scientists figure it out, let me just say it might be worth it to do a trial run for six or twelve weeks. What do we have to lose?

Anyway, that brings me to the pizza crust... I really struggle with bread-like gluten-free recipes, because I don't yet understand the chemistry of gluten-free flours, and so many recipes call for eggs to bind it all together, so I'd pretty much given up on ever finding a gluten-free pizza crust recipe my family would love.

But then, a friend of mine on Facebook talked about a "two-ingredient pizza crust" that was made with just quinoa and water. That's it. Two things. And, she said, it was delicious, chewy, and fantastic!

Well, you know me... I can rarely leave a recipe alone, so I enhanced it a bit, but the resulting crust was amaaaaaaazing!

Ready to make your own? Here we go!
Gluten-Free Pizza Crust
1 c. uncooked quinoa
1 t. garlic powder
1/2 t. dried basil
1/2 t. dried oregano
1 c. water
Preheat oven to 425 degrees F.
Put all ingredients into a blender, and blend, pausing occasionally to scrape sides of container. Continue until a thick, spreadable paste is created.
Cover a baking sheet or pizza pan with parchment paper, and spread crust mixture over paper. Crust should be about 1/4" thick.
Bake for 12 minutes, then flip over, and bake for an additional five minutes.
Remove from oven and set aside for assembly.
Cashew "Cheese" Sauce
1 1/2 c. raw cashews, soaked for one hour
1/3 c. nutritional yeast
1 t. onion powder
1 t. minced garlic
1 t. lemon juice
3 T. stone ground mustard
3 T. apple cider vinegar
1/3 c. HOT water
Drain cashews, and put in blender with all remaining ingredients. Blend well, pausing occasionally to scrape sides of container. Continue until a thick sauce forms.
If a thinner sauce is desired, add more water until desired consistency is achieved.
This sauce is great over pasta, or served as a dip or fondue. Simply adjust the consistency to serve your needs.
You can also add in the following, to provide different flavors:
Here's how we assemble our pizza:

Posted by Christina-Marie Wright at 2:55 PM

Email ThisBlogThis!Share to TwitterShare to FacebookShare to Pinterest
Labels: baking, breads, do-it-your-damn-self, gluten-free, main dishes, pizza, with a little help from my friends