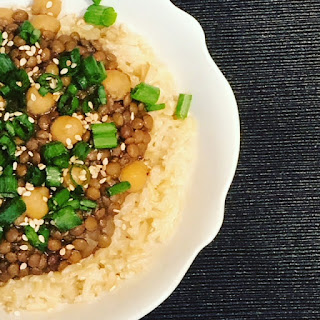 First, the bathroom sink backed up to high heaven, and after hours of plunging, pleading, and crying, it still wouldn't drain. I had blisters on my hands, funky water from head to toe, and nothing was working.

In desperation, I locked the bathroom door, and began to pretend that room didn't even exist.

We can pee and shower in the laundry room. No problem.

Then, I had an Individualized Education Plan (IEP) meeting at the school for one of our foster kiddos. Things have been particularly tense between the special education staff and me, since I wrote a blog post about objectionable language used by the school psychologist over on TheGonzoMama.com, and the post accidentally went sort of viral. Whoops.

So, there was a lot of anxiety leading up to the meeting, on my part, and I didn't expect it to be pleasant. To top things off, Mr. Wright had got himself lost while out taking photos of some homes, and was late getting to the appointment, so I had to begin without him.

As it turns out, the meeting went pretty smoothly, but I was a hot firetrucking mess by the time I got there to start the meeting, alone.

And when we got home, the sink... well, it was still backed up, and I begged Mr. Wright to just deal with it, because I was in. no. mood.

Then, I headed into the kitchen to prepare some serious comfort food. I wanted sweet. I wanted spicy. I wanted warm. I wanted filling.

I wanted it all, and I didn't want to have to wait too long for it.

I used some basic Korean sauce recipes as a basic jumping-off point, and came up with the recipe below.

By the time it was done, all was well in the world. The issue with the sink was caused by a small toy being forced through the drain, and effectively blocking it. Life with kids... gotta love it. 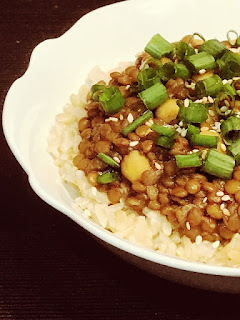 Brown rice to serve over 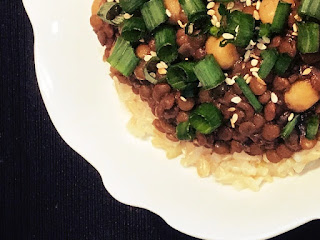 In a large saucepan, heat one teaspoon sesame oil over medium heat.

Add diced onion, and saute until soft, tender, and beginning to brown slightly.

Increase heat and bring to a rolling boil.

Cover pan tightly, reduce heat, and simmer for 20 to 25 minutes, or until most of liquid is absorbed.

Stir in chickpeas, and heat thoroughly.

Serve over brown rice, and garnish with chopped green onions and sesame seeds.

Posted by Christina-Marie Wright at 10:47 AM