My baby brother got married a few weeks ago. It was an awesome weekend for my siblings and I to spend time together, especially since we're a bit spread out, geographically. The evening wedding was followed by a raucous late-night karaoke party, and a barbecue the following day.

In case you're wondering, I sang Chumbawamba in a shameful performance during karaoke.

While my brother-in-law smoked and grilled game he procured himself, I set about making killer vegan salads and sides, which I hoped would make believers out of my omnivorous siblings.

Two of my brothers, in particular, consider themselves connoisseurs of potato salad, and their standards are pretty high. My older brother exuded palpable anxiety over whether a vegan potato salad would measure up, and the anticipation appeared excruciating for him as we waited for guests to arrive.

When he was finally able to dig in, the smile on his face -- and the second and third helping -- were all the response I needed.

My other siblings agreed, and the potato salad (along with the coleslaw and marinated bean salad I'd prepared) was a hit. I wasn't surprised, naturally. I've been making my recipe for decades, and it never fails.

I hope your family enjoys this easy recipe as much as mine does! 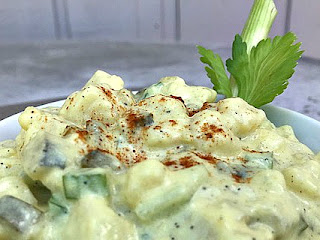 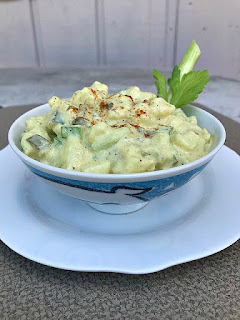 Scrub potatoes and place into a large stock pot. Add enough water to cover potatoes, and bring to a boil. Continue to boil potatoes until they are tender when pierced with a fork -- about 8 to 15 minutes, depending on the size of the potatoes, and your desired tenderness.

Remove potatoes from heat and drain. Set aside to cool.


In a saucepan, heat oil over medium heat and add diced onion. Sauté onions until soft, and just beginning to brown. Remove from heat and dump into a large mixing bowl.

Add chopped celery and diced pickles to bowl and toss to mix.

Use a paring knife to slide skins off cooled potatoes, and large dice into bite-sized pieces. Add to bowl.

Garnish with a sprinkling of additional paprika, if desired, and chill well before serving.

Makes a lot of servings, because my family is huge. Perfect for potlucks, holiday gathers, and more! 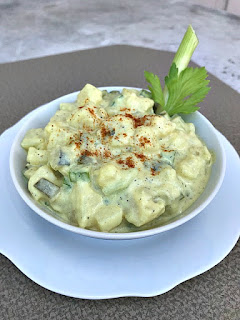 Posted by Christina-Marie Wright at 7:01 PM