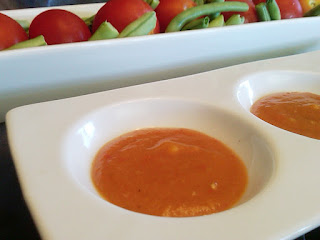 I have a friend - a sweet, wonderful friend - who occasionally sends me jars of amazing pepper sauce. Over the years, Danny has sent me pineapple habanero sauce, cherry jalapeno sauce, plum cayenne sauce, and more. This summer, he didn't send me any, as he's been remodeling a house and jet-setting between Seattle and Bangkok. *frowny face*

Thankfully, someone blessed us with a couple pounds of fresh garden peppers, and - while I love making recipes like The Sexy Vegan's Jalapeno Poppers and fresh salsa - I didn't have a plan to use all the peppers stockpiled in my refrigerator.

So, I called up Danny, and begged him to give me some pointers on recreating his amazing sauces. He gave me general guidelines, like, "Use a bit of this and a bit of this, then cook it and add a bit of this."

Miraculously, the result was absolutely divine. I was even able to use up some of this summer's fresh tomatoes!

Without further ado, here's my recipe for...

3/4 c. vinegar (I used apple cider vinegar, but you can use white, if desired) 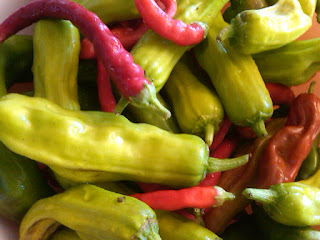 In a 2-gallon stock pot, dice up the hot peppers, removing the stems from the top.

Peel and remove seeds from the apples, roughly chop, and add to pot.

Cut tomatoes into large chunks and toss into the pot.

Finally, roughly chop the onions and garlic and add to the pot. Give the contents a good stir. It should be relatively full. 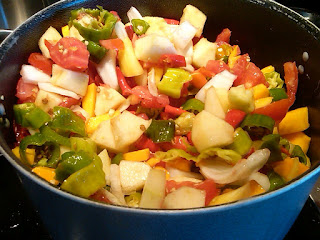 Over medium heat, cook the mixture down, stirring occasionally, until the pot is about half full. This will take a while - probably long enough to read a chapter or two of Fifty Shades of Grey. As the vegetables heat, their natural juices will fill the bottom of the pot and they will become soft and tender. 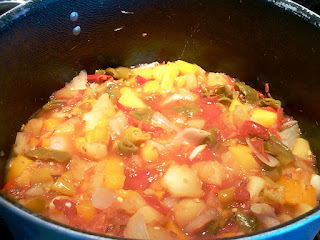 Remove mixture from heat and puree until smooth- in small batches - in a blender or food processor, transferring blended sauce into a large bowl. It will still be hot at this point.

When all of the vegetables are pureed and transferred to the bowl, you're ready to add your vinegar. Stir in 1/4 cup at a time. You may use more, if desired.

Note: Danny actually recommends using a confectioner's strainer or cheesecloth before adding vinegar to remove fruit and vegetable pulp before adding vinegar. If you want a smoother sauce, you may do so, but I've found it unnecessary, unless I'm using an especially stringy or pulpy fruit, such as pineapple. I'm not terribly picky, and don't mind a small fleck of tomato peel in my sauce, but Danny is a perfectionist. Me? Not so much. You may strain, if you like.

Transfer the still-hot sauce into jars.

Now, if you have a metric busload of friends and neighbors who love pepper sauce and will use it right away, you can simply stop here, refrigerate and enjoy your sauce. If, however, you'll be storing some of it, you'll need to can it.

I recycled canning jars and lids my mother sent to me. See the labels? God help anyone who opens one of these jars, looking for apple butter. 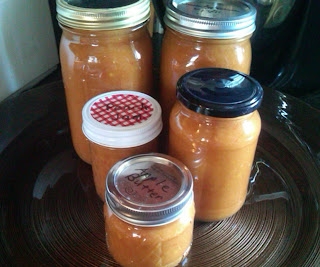 Fill your jars to within 1/4 inch from the top, making sure not to slop any sauce around the rim of the jar.

Place the jars in a double boiler, adding water two-thirds of the way up to the top of the jars, and bring the water to a boil. 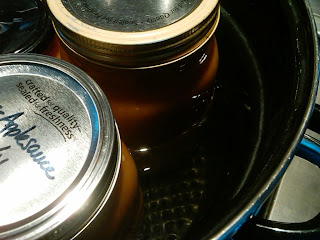 Continue to boil for 20 minutes or so. The tops of the lids may not be vacuum-sealed down completely, but won't be "springy" when you press on them.

Allow the jars to cool. As they cool, they'll vacuum seal, creating a concave curve to the lid.

There's a whole chemistry aspect to canning - one which I'm terrified of - which calculates the pH of a canned food, and requires adding acid to the mix to prevent the growth of bacteria. That's why we add the vinegar. I added it to my taste level, but I cannot vouch for the overall pH of the batch. Are there any canners and/or chemists out there who can, for me?

In any event, even though the jars are sealed, Danny and I recommend storing them in the refrigerator, reducing the opportunity for said bacteria to grow.

At our house, it isn't really an issue, because we put this sauce on everything, from tortilla chips to fresh vegetables to rice and pasta, and it's gone before we know it!

Tip: Add a zingy flair to your regular tomato-based pasta sauce by throwing a few tablespoons of AWESOME SAUCE in. "Like" Sexy Vegan Mama on Facebook! Don't forget to swing by The Gonzo Mama's place to see what she's up to.
Posted by Christina-Marie Wright at 9:02 AM