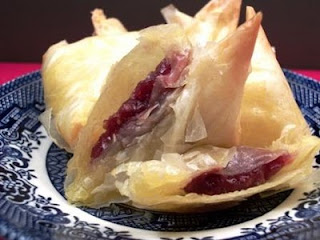 I used to be afraid of phyllo. I suspect it was because I grew up in my mom's bakery, and making baklava was An Event of Importance. Mom couldn't make baklava unless someone else was working the counter, and there was nothing in the oven. She didn't take phone calls or respond to questions of a non-life-threatening variety.

Once she started working on baklava, a marching band could weave through the building and she wouldn't so much as look up.

So, I get it. I know phyllo is scary to work with. If you become distracted while working with it, it'll dry out and shatter, and even your tears won't make it supple enough to form.

There are some tricks I've learned, though, and now I embrace the challenge. First, follow the thawing directions on the package precisely. Second, cover the stack of dough sheets with a layer of plastic wrap and cover the entire setup with a wet towel. Third, make sure you don't have kids running around in the kitchen. (I wait until they're all asleep, myself, but maybe you have a magic nanny or a daycare or something.) Fourth, put your phone away, and on a silent setting. Don't set it down within your line of vision, or you'll be tempted to respond to a text message or pick up the phone when your beloved husband calls... six times... without leaving a message.

In other words, prepare and focus.


After you've thawed and prepped your phyllo as directed on the package, each sheet of phyllo will be brushed with melted dairy-free margarine (some people use butter, but this is my kitchen we're talking about, folks) before being shaped or formed.

Make sure your filling (whether it's vegetables, fruit, nuts or whatever), is ready to go, because you won't have time to throw it together once the margarine-brushing festivities begin.

In my experience, it's much easier to cut phyllo before brushing. It's like the difference between trying to cut dry paper and trying to cut it soaking wet. So if you need to cut your dough to a smaller size, use a long knife to slice a stack of phyllo when it's dry, then brush margarine on the smaller pieces.


Folding these pastries reminded me of making paper origami cranes.
In Hiroshima, monuments and memorials are draped with strings of colorful paper cranes by the thousands. Seeing them reminded me of Sadako and the Thousand Paper Cranes

, and childhood experiments with origami paper. Fortunately, the pastries require slightly less patience and precision. They taste better, too.

I started with the raspberry filling from my Vegan Raspberry Cream Cheese Brownie Bites. You won't use a whole batch for this project.

Slice a stack of six phyllo sheets, lengthwise, creating twelve long rectangles. Be sure to wrap up any remaining phyllo immediately and store according to package directions.

!) near the top left corner. Don't flatten the scoop of filling. You'll want a nice, compact ball to fold your pastry around.

Place another sheet of phyllo directly on top of the bottom sheet and filling, and brush with margarine. 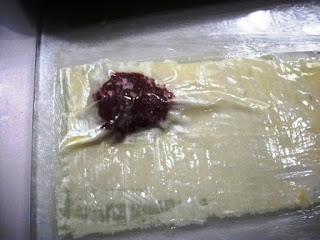 Fold the top left corner down to meet the bottom edge of the rectangle, forming a folded-over triangle at the end. Fold the triangle over, then up, then over, and so on until you've formed a layered triangle, stuffed with filling. 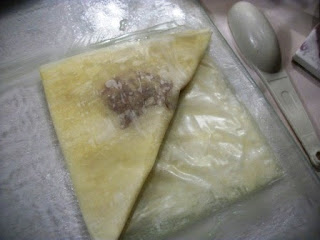 Position your triangle so it looks like a mountain: longest side on the bottom with a peak at the top. Fold the very tip of the peak over the bulge of filling. 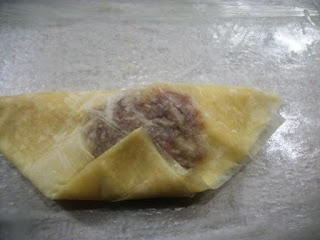 Fold the remaining corners of the dough in and slightly up, crossing the "wings" of the pastry at the top. 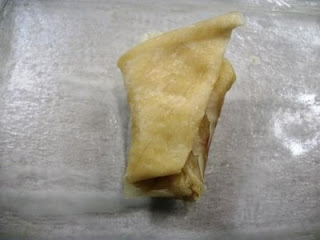 Prop the folded pastry in a muffin tin cup, folded sides facing outward so they have room to expand while baking. 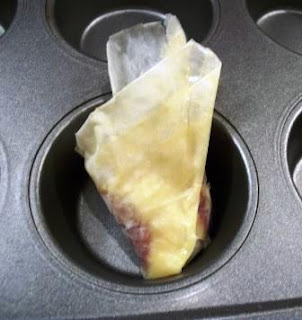 Bake for 12 to 15 minutes, or until edges of pastry just begin to brown. They'll cook a bit more after they come out of the oven, because the hot margarine continues to brown, so don't over-bake them. 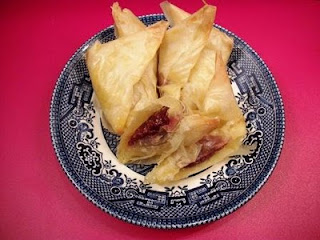 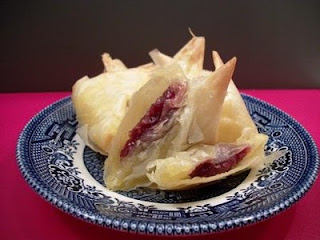 "Like" Sexy Vegan Mama on Facebook! Don't forget to swing by The Gonzo Mama's place to see what she's up to.
Posted by Christina-Marie Wright at 8:52 AM